We all know the creative industry is a special one, characterized by more competitiveness than any other industry. Especially since the use of the Internet has broken down the geographic boundaries, making possible the collaboration between the customers and the designers worldwide. But with so many creative graphic designers around the world, just getting noticed is extremely difficult, not to mention getting customers – if you work as freelancer – or being hired – if you want to work in a company.

Just having a brilliant portfolio is not enough anymore to stand apart from your competitors. You need something extra, in order to get the full attention of your potential customers or employers. Therefore, the designers around the world have found and have been coming up with unusual and creative resumes to stand out of the crowd and gain an edge in the hunt for getting hired.

We searched around the internet and compiled for you twenty great examples of graphic designers’ creative resumes you can get inspiration from, and that will help you to reinvent your resume.

Livia Natalie (www.behance.net/livianatalie) is an Indonesian multimedia graphic designer, with expertise in branding, illustration, motion graphic, and UI/UX. Maybe for some people an animated CV could be a little bit risky proposition, but she really did a great job with her resume. It’s funny, playful, beautiful animated and it covers all the essential points the employers need to know about her. And the best part is that it takes just one minute to see it, making him more likely for people to go through the whole thing.

Benjamin Benhaim (www.behance.net/benjamin-benhaim) is a Paris-based art director and motion designer whose resume was inspired by the Jimmy Raheriarisoa’s flat CV. Being created using Cinema 4D, Octane and After Effects, this resume covers all his bases skills and has a plenty of playful touches. Not just the renderings, but also the combination of bright, light and lambent colors are the elements that draw the viewers’ eyes and makes them look for more.

Robby Leonardi (www.rleonardi.com/interactive-resume) is a New-York based multidisciplinary designer. Specialized in graphic design, illustration, animation and front-end development, he worked for companies like Fox, Speed TV, FX Networks, myNetworkTV, and G4 and won multiple awards. His incredibly funny and interactive resume definitely draws the attention not just of the potential customer and employers, but also shows his incredible talent and creativity. It’s a real pleasure to keep scrolling it over and over again!

Vincenzo Castro (www.behance.net/vincenzocastro) is a young Italian graphic designer based in Milan, whose work is focused mostly on user interface, digital art and illustration. His schematic CV looks clean and simple, almost like and assembly sketch and highlights all his basis skills.

Look at this creative resume! João Martins (www.behance.net/joaocrmartins) is a young Portuguese graphic designer based in Lisbon, who focuses on graphic design, motion design in television and User Interface design! His resume is absolutely visual. By combining photography and graphics, the CV not just highlights his skills, experience and the strengths of the designer, but also makes anyone wanting to keep reading.

(www.behance.net/EvelienCallens) is a Belgian graphic designer and illustrator. Her love for minimalism and geometric shapes is also highlighted by her resume. She keeps things short and nice with a clear design. Evelien has chosen to use a mint-moss green color that works very well with the organization of the information from her resume and her title branding. Also, the origami elements added here bring an interesting dimension and personality to Evelien’s resume.

Things almost get crazy with this extremely creative and psychedelic Alysa Choudri’s (http://alysachoudri.tumblr.com/ ) resume. If you take a closer look, she managed to give a lot of information without being boring and cramped. Graphic designer, photographer and illustrator, Alysa loves colors and uses them to add a new dimension to her resume. 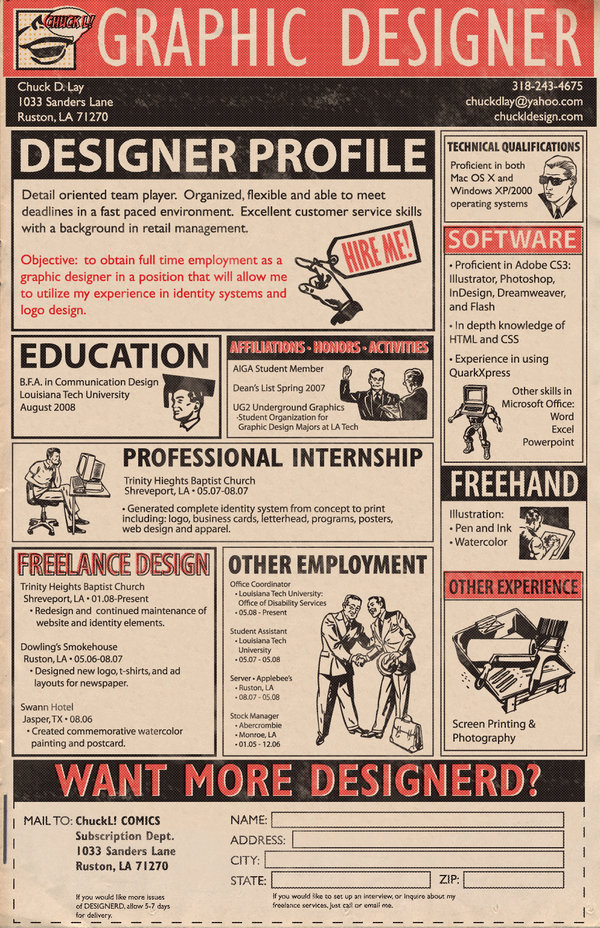 You might think this is an add page from an old newspaper, right? Well, no! It’s Chuck Lay’s (http://chuckdlay.deviantart.com) resume, a Dallas-based graphic designer. A lot of his inspiration comes mostly from the comic books and you can see this not just in his work, but also in his CV. And as the vintage design is one of the hottest trends for 2017, Chuck Lay’s resume for sure draws the eyes and stands out from the crowd. 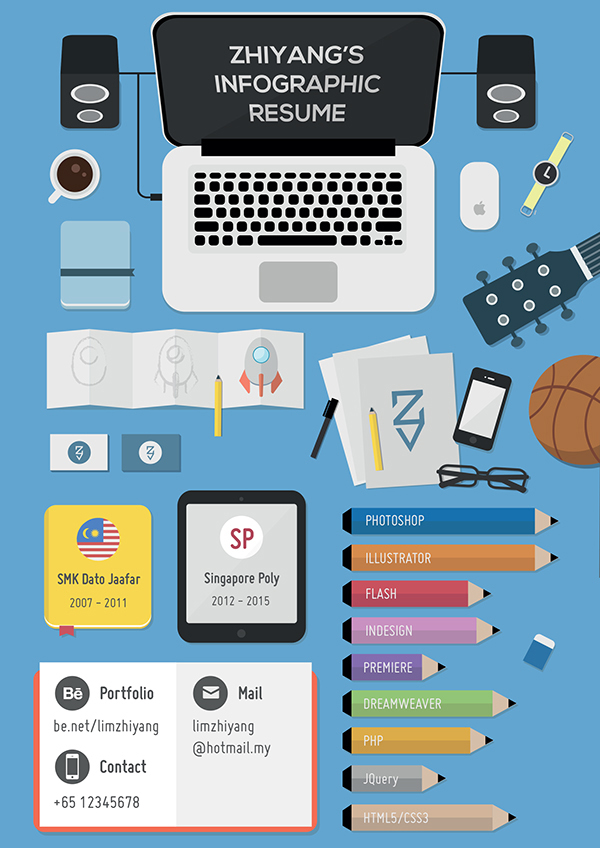 Zhiyang Lim (www.behance.net/limzhiyang) is a Singapore-based designer and front-end developer who always tries to think outside of the box. Believing the design can transform the world, Zhiyang has chosen a creative, playful and colorful version for his CV. Based on the concept of his working place, the resume has a cartoon-like design. Even if there are almost 15 design elements there, you can still say a lot about his experience and skills. This is a great example of the expression “an image worth more than 100 words” and of how you can tell a story without actually saying anything.

With this resume, Steve Fraschini (https://dribbble.com/novagraphix) – graphic designer based in Paris – proved that the classic black & white still play the game in the design world and can win it. With a simple and clean design, having the information very well organized and some design elements that draw your eyes to every section, this resume is a good option for those who love the minimalism and classic.

This smart and creative resume was created by Eric Ghandi (www.ericgandhi.com). Starting from the belief that simplicity is the ultimate sophistication, his CV just shows us this. It’s simple and it’s brilliant! Nothing more than a couple of Google fonts, Google logo, a great idea and a lot of creativity! 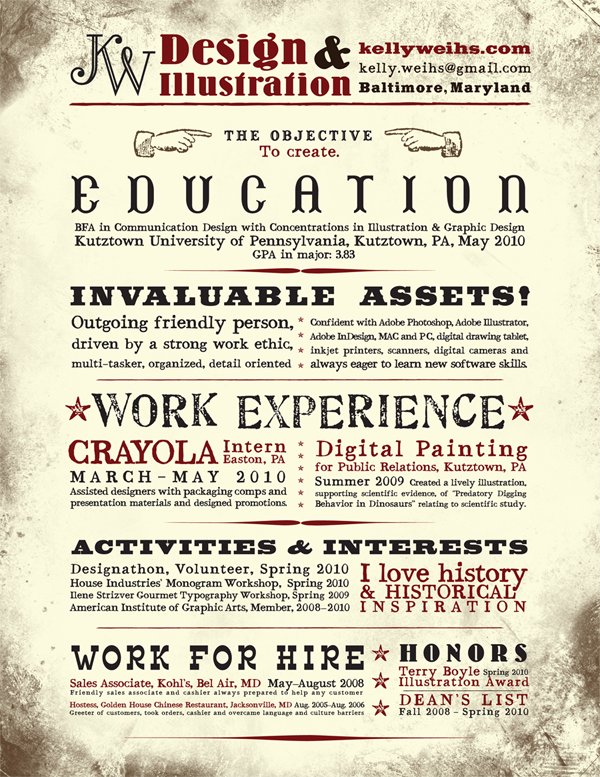 Kelly Weihs’s (www.behance.net/KellyWeihs) resume stands out from the crowd thanks to its vintage and western style design. Starting from the idea of creating a CV that is different from everyone else and loving the historically inspired designs, Kelly had a lot of fun while designing this resume. And she did a very good job!

Omondi Abudho (www.behance.net/pixcaliba) is a Kenyan art director and photographer, based in Nairobi. Picking up a bit of attention for his resume, Abudho has designed his CV as an unfolded box. So, if they want, all the potential employers can cut it out and following the die, can fold it into a box, completed with the creative “nutrition” facts. 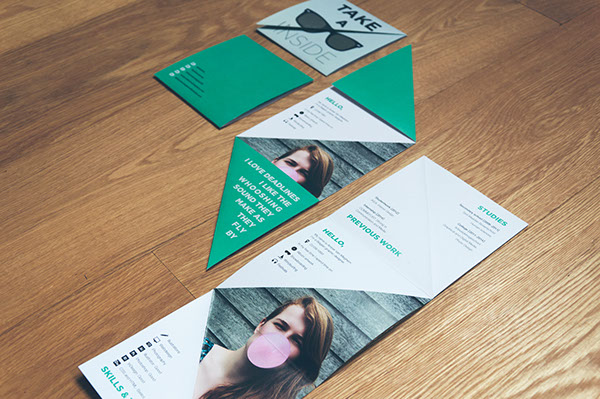 Amber Van Mieghem (www.behance.net/amberlink) is a young Belgium graphic designer. Named “Take a look inside”, her resume is creative and compact. Designed as a flyer and playing interesting with the folding lines and shapes, Amber’s CV is reveals all what a customer or employer needs to know about her skills and experience.

Ada Napoirkowski (www.behance.net/napiorkowski) is art director and illustrator based in Heidelberg, Germany.   Instead of designing just a resume, she created a whole self-promotion pack, in order to respond to her style and personality. And do you know what is the best part? It’s all hand-made and printed using a normal domestic printer.

Kevin Fernandez (http://nikond50.deviantart.com/) is photographer and designer based in Santa Clara, California. Fernandez used his skills also for creating his own resume. The bright colors, shades of purple, the typography and the contrast used exactly where it’s necessary to work incredibly well together, creating an eye-catching resume!

Ed Hamilton is a London-based designer and copywriter who developed a creative way to stand out to prospective employers. Using Google Maps’ My Maps feature, Hamilton mapped his resume using different colored pins in order to create personalized placemarks. Each pin has an explanatory text, including information about the place he lives, his interests and work experience.

Michael Anderson’s (www.flickr.com/people/lunyboy/?rb=1) resume was born from an epiphany. As he realized suddenly a resume is just tagged temporal data, he decided to treat it as such, in order to convey much more information. His resume is creative and colorful, bringing the standard display of data to another level. Even if Michael is now working in his family’s business, his resume still draws a lot of attention online.

Chen Zhi Liang (www.behance.net/zhiliang) is a young designer based in Singapore. He accepted the challenge of his graphic design tutor to create an inventive resume that would make him to stand apart from the competition. So, he decided to go minimalist and designed this creative infographic resume in which he says a lot without using practically to many words. Just graphics. And he did a very good job. 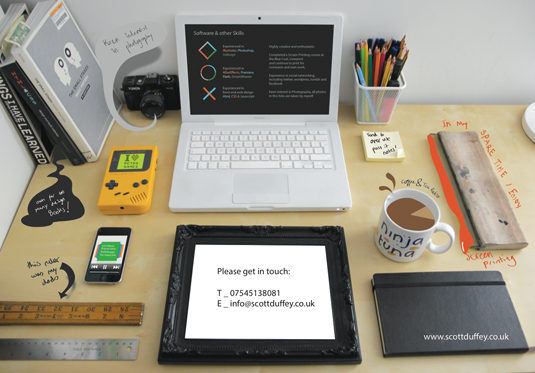 The British designer Scott Duffey (http://www.scottduffey.com) created this work place scene in order to use it as resume in the back of his portfolio. “I wanted to end my portfolio in a way that would leave an impression,” explains . “I wanted to be remembered by my interviewer, so I needed to deliver key information whilst also giving a feel of my personality.”