Movie posters give graphic designers a very large canvas to work on, which has resulted in some truly stunning and memorable work. The design work that goes into creating these posters can have a big impact on whether or not a movie is ultimately successful, so there’s a lot of pressure put on each designer’s shoulders.

Fortunately, when the right blend of eye-catching and relevant is put together, it’s hard for audiences not to get excited after seeing the poster. Let’s take a closer look at 30 movie posters that represent the very best in this particular graphic design niche.

The movie was met with mixed reviews and proved to be very divisive among fans, but this poster definitely delivers the goods. The evocative “false god” statement written on Superman’s chest would have been enough to capture attention, but the dark, comic book styled art truly set the tone for the film.

The Statue of Liberty’s head draws viewers in, and the purposeful slant added to the wording on this poster adds visual intrigue. Combine that with the implied motion of the characters on the street, and it’s practically impossible not to pause for a moment and take everything in.

The art that was used for the original “Star Wars” movie is absolutely gorgeous and has become instantly recognizable. The artist’s choice of colors, placement and elements from the film is exciting and promises a thrill ride. Fortunately, the movie was able to fulfill the high expectations that were generated by such a wonderful piece of art.

The “Cloverfield” poster seems almost like a clever nod to the “Escape from New York” image. After all, here’s the rest of the Statue of Liberty. The decision to depict a decapitated symbol of America proved to be a great choice. Adding the smoke in the distance made the poster even stronger. This poster succeeded in making movie lovers instantly curious, and it didn’t give away any of the film’s secrets.

Whether you love or hate this controversial classic from Stanley Kubrick, it’s hard not to appreciate the artistry that went into the poster. The usage of white space ensures your eyes are drawn to the main character, and it’s easy to see that this is not going to be your average movie.

Bold lines and colors are always a good way to capture attention, and this poster provides an excellent example of this approach. The designer behind this “Walk the Line” poster also used elements of Johnny Cash’s career and personality to make it instantly attractive to fans of Cash’s music.

7.Raiders of the Lost Ark 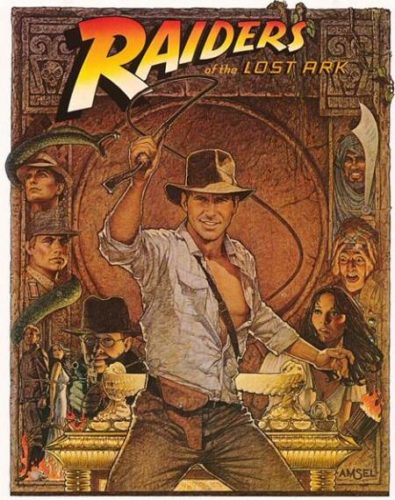 The muted background tones worked very well for this poster because they enabled the main character to stand out and demand attention. Flanking Indiana Jones on both sides with other characters helped offer a few clues regarding the film’s subject matter and plot, but the main driving point is the excitement of a whip wielding hero.

When you make a movie about an old and relatively obscure comic book character, you need to have a hook to bring audiences in. This poster delivered quite nicely. The juxtaposition of the vivid red with the black and white tones is eye-catching, and the large wording begs to be read.

You know that you selected the perfect tagline when it’s still being used in memes almost a decade later. This poster unveiled the Joker’s phrase “why so serious?” It also let audiences know that this wasn’t going to be the less threatening version of the Joker they’d seen on screen in the past. Instead, this Joker is clearly demented and violent. 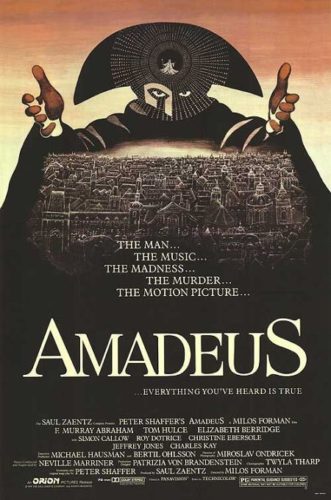 This piece is instantly compelling due to the use of negative space and the ominous looking character at the top. Is he opening his arms to welcome or threaten you? Viewers aren’t certain, and it adds a huge level of drama and intrigue.

Several of the posters that advertised Quinton Tarantino films could have made it onto this list, but “Pulp Fiction” was one of the first to captivate audiences. It feels like the cover to an old pulp novel, and there are many clues in the image of Uma Thurman that provide some insight into the level of action that viewers can expect. At the same time, the calmer, more sensual approach of this particular image is very alluring.

Most of the selections on this list have been stunning due to their beauty or usage of colors and space. “The Invasion” is stunning because the designer chose to forego all of those typical elements in favor of a hastily written message that would instantly strike fear in anyone’s heart. It’s an unconventional and bold choice that works very well for the movie’s genre and subject matter.

When audiences first saw this poster, they were most likely shocked by the implied nudity and sexuality that was combined with a beautiful rose. The poster captures attention without offering any concrete clues about the film’s content, and yet it has rightfully become one of the most easily recognizable movie posters of all time.

Jim Henson’s dark fantasy was ahead of its time. The poster’s designer made the interesting choice of highlighting a villain instead of the heroes. It’s unclear for viewers from a quick glance exactly what this film is about, but the artwork is so beautiful that it’s hard to look away. Billed as a family movie, this poster is a reminder that it really works better as the cult classic that it has become.

The serial killer that “Zodiac” is based on is still at large, which makes the usage of thick fog on this poster even more compelling. After all, you could easily get lost in the fog in the same way that the killer eluded authorities. That unknown feelings robs viewers of their sense of security and helps pull them into the madness that California dealt with in the late ‘60s and early ‘70s.

The poster for “Rocketeer” deserves a spot on this list due to the brilliant usage of implied movement. It’s impossible not to feel the excitement of flying while looking at this artwork, and the retro look fits in well with the movie being set in the 1930s. 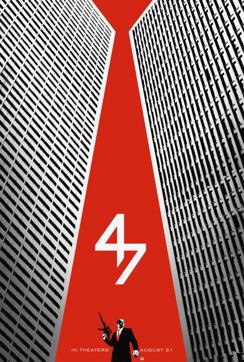 The lines on this poster are bold and almost dizzying. Toss in the splash of red in the middle for visual contrast and you have a movie poster that would make anyone do a double take.

“Moonlight” uses the tagline “This is the story of a lifetime” to pull audiences in, and this was expertly depicted in the imagery chosen for the poster. Splicing three images together from different stages of a person’s life was visually interesting enough, but choosing a different color for each of them really brought the point home.

Even fans of minimalism were probably stunned when they saw the poster for Marvel’s “Ant-Man.” In fact, if you don’t pay close enough attention, you’ll lose sight of the title character amidst all of the white space. This was a risky approach that paid off big and deserves to be recognized. The designer was probably a bit nervous when pitching a movie poster that was almost completely blank white space, but fortunately, Marvel understood their vision and provided us with this unusual poster. 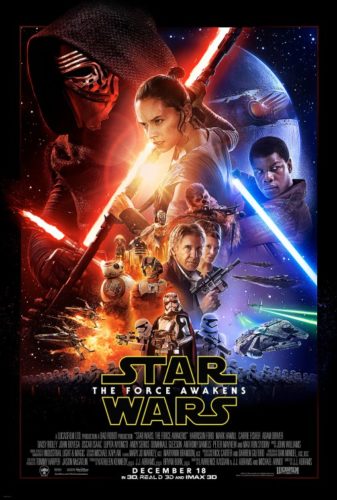 This was arguably the most exciting poster of 2015, and it was a great way to advertise one of the most anticipated films of all time. Splitting the poster between the light and dark sides of the force offers a lot of visual contrast, and placing the main character in the middle of everything makes her true identity an even more intriguing secret.

“W” provides another example of a movie poster that is so unusual that it’s stunning. With the stark white background and long list of quotes from the real-life counterpart to the title character, the creator pushed movie posters into an entirely new direction. Undeniably eye-catching, even if that’s primarily because it’s so unusual to see so much text on a movie poster.

A classic example of the perks of using implied motion to draw the viewer in. The usage of the bold red background also attracts attention, especially when contrasted with the presence of white and black.

This poster works on many levels, but it’s most notable for having the appearance of an actual quarantine notice. Giving the poster a folded appearance helps sell the illusion, as does the aged and faded effect that was added to the lettering.

The bleak subject matter of the film is highlighted in all of the darkness within the poster. The inclusion of a bit of red and one splash of blood combines well with the perspective and evil look on Johnny Depp’s face. This image is captivating to look at it, but it makes it clear that this musical is going to be very dark.

Speaking of musicals, “Moulin Rouge’s” poster is romantic, exciting and sensual. The bright splash of red in Nicole Kidman’s dress instantly draws the viewer in, as does the magnificently chosen lighting. 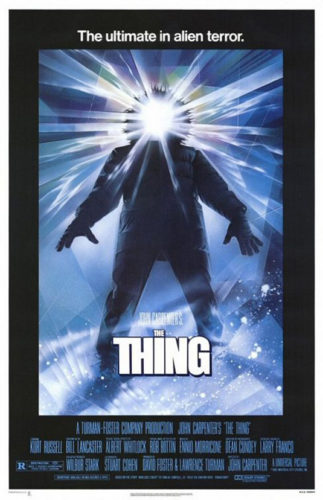 The poster for the 1982 remake of “The Thing” has become a classic, but did you know that it was created in just one day without any movie stills or concept art to use as a reference point? That alone would make this a stunning poster, but it also stands out for being an intriguing piece that gives practically nothing away about the movie.

It may seem odd to have a poster for a movie about an exorcism that doesn’t feature the exorcism, the person who is possessed or any of the religious items that are used during an exorcism. Fortunately, the image of a lone man standing with a bag staring at light coming out of a window is far more unnerving than any of those other elements would have been. It’s clear something bad is going to happen, which allows audiences to scare themselves with their imagination.

28.Silence of the Lambs

This piece has been acclaimed by many experts as one of the best movie posters of all time, and it features a lot of symbolism and some hidden artwork on the back of the moth. The colored eyes draw you in, and the moth leaves you wondering what nasty surprises lurk within the movie.

When a movie poster earns the title of most valuable poster of all time, you know it’s got something going for it. Revered for its aesthetics, this work of art is easily recognized by people who have never even seen the film. There’s a reason it has become a beloved classic; it’s absolutely stunning.

The beauty of the “Alien” poster is that it makes viewers uneasy without actually showing anything that’s truly scary or intimidating. The negative space and eerie glow coming from the egg are enough to scare people, and that makes the execution of this poster a big winner.

Hundreds of movie posters are designed each year, but only a handful will be so stunning that people still display and analyze them many years later. The examples on this list are all in that category, though, and they definitely offer inspiration for graphic designers who want their work to attract a lot of attention.
Bonus: Want more awesome movie posters? Check out these 10 amazing modern posters.