Every once in awhile, I stumble upon articles that simply change the way I think completely. Those kind of disruptive articles are really hard to find. And as a marketer, I’m always obsessed with creating that kind of content, disruptive content. Knowing that I could change the way you think, even in the slightest, and that my article could be a pivotal point in your career is simply mind-boggling and it truly resembles the staggering power of content.

Everyday, there are roughly 2 million new articles published on the almighty web and there are 571 websites popping out every 60 seconds.

That data alone is completely and irrevocably humbling.

It just gives you an idea of how small you are. If you aren’t new on the internet and you already have an audience, that’s something that you should take pride in and not neglect it. After all, with great power comes great responsibility.
Knowing that someone, someday, chose to read your article, admire your design, and use your products instead of going to the other gazillion alternatives, is truly mind boggling.

Now, in the vastness of content created every day, how do you get noticed? Namely, what sets your article apart and what is your value proposition?

Truth be told, nowadays, getting noticed is a matter of uniqueness. I full heartedly believe that as a modern day content creator, you can’t afford being stuck in the box. You can’t come up with the same ideas you came up with in 2013. There are a few factors marketers use to grab someone’s attention, and I think content creators can pull off the same techniques.
Curiosity, Creativity and Controversy. Or the three “C’s” of user engagement, if you will.

Although this article focuses mainly on Controversy, let’s talk a little bit about the two other C’s.

It’s disturbing but fascinating that we are paradoxically drawn towards some quite unpleasant things. The reason why a video about two guys eating a Carolina Reaper pepper gets more than 18 million views, is the same reason why someone would eat those peppers in the first place. Curiosity. Answering questions like “What happens if..” is fun, and being curious is something we all have in common.

Curiosity is the driving force behind mankind’s never-ending pursuit for knowledge. Curiosity can be the right incentive for an individual to click on your article, view your video, look at your design, or engage with your content for that matter.

Differing from the other two, the process of creating something truly creative, requires a tremendous amount of work. It takes a good amount of skill to awe someone with your creative work.

The goal of creative work is to generate emotions. Whatever the purpose of the work itself is, you want people to connect with it. Regardless of the type of content you are creating, the way you deliver your content can make all the difference between standing out among the message flood or getting lost in it. After all, you can have a completely dull, or common idea and just approach it creatively. A great example is Apple. They took comon ideas like an Mp3 player and with the right design, and a creative value proposition, they revolutionised the music industry with the iPod

The type of controversial content that intrigues a user is so much more engaging than the same old traditional content.

Predicting the outcome of controversial content is arduous, which makes it really difficult to handle. Apple was probably one of the first companies that leveraged controversy as a PR move. the challenge has always been to break rules, to find something unexpected to engage people to tell a story. They knew that this tech is not going to be just another business for Steve, but this is actually going to change the world. They had to introduce the Mac in a dramatic memorable way. They needed something brave, something controversial. The ad depicted a sea of people blindly following “The Big Brother” which people perceived as being IBM. And here comes Apple, viewed as a women that stood up against the big brother through the democratization of computers.

People weren’t talking about the Super Bowl game where the ad was displayed but instead they were talking about the ad, which asserts the viral nature of controversial content.
United Colors of Benetton are known for their controversial ads which are often enough viewed as audacious. In one of their recent campaign, the Unhate campaign, the ads were showing some of the most influential people kissing as a symbol of unity across race, religion and political beliefs. The media exploded. Everyone was talking about the ads, and Benetton’s brand awareness grew exponentially.

Benetton was forced to pull one of its images from its new ‘Unhate’ campaign. The Italian firm withdrew the photograph featuring Pope Benedict XVI kissing a senior Egyptian imam on the lips after the Vatican denounced it as an unacceptable provocation. Some people would agree that creating that image of the Pope was a bad move and it brought a lot of hate to Benetton from the Catholic community, which is counterproductive considering the message of the campaign. However, it also brought a lot of media exposure, which we all know that it’s always good. Right? 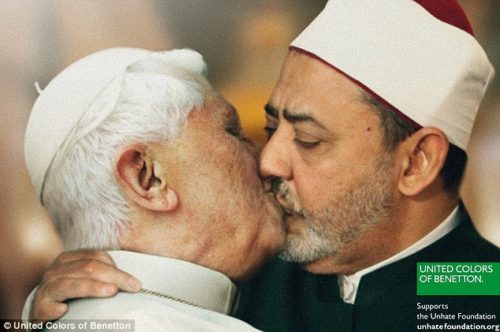 Different and original content works. Regarding if it’s categorized as controversial, creative or curious, content that excites people at any level, is usually performing better than the other mainstream content. It gets attention on social media, it generates links and mentions, and it often leads to a huge amount of exposure. As long as controversial content is created and managed with care, it’s a great marketing tool.