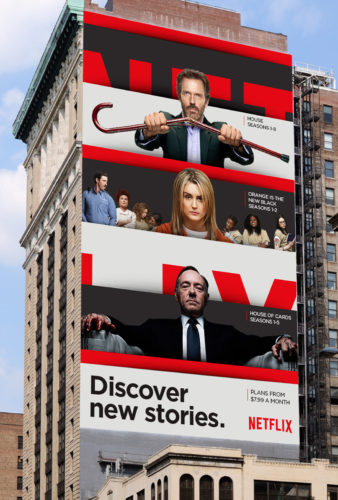 Today’s design requires more than just a single screen, it has to adapt to multiple screen visibility and usability. As consumers toggle from TV to PC for media consumption, designers are forced to adapt a single design concept to a multitude of screens. It is impressive to see a design that works not only on a phone or desktop but also on a large flatscreen, the side of a building or a bus. Which is why Netflix’s rebrand is significantly fascinating.

About a week ago Netflix unveiled its latest identity design. With the creative contribution of Gretel, a studio based out of New York responsible for refining and developing a complex solution to the new design. They set out to create a look and style which Netflix could grow into. A significant challenge considering their ever expanding collection of popular and original series. The series titles needed to look cohesive when laid out together to represent the brand, but also have the capability to be identified as individual media. The solution? Gretel developed “The Stack“, a modular type system of flat design that is built out of three uniform sized cards that can be rearranged to allow for a variation in brand volume.


Netflix’s media is streamed across 50 different countries which is a huge undertaking when it comes to rebranding. By implementing the Stack system, designers were given extra flexibility. Allowing them to pick and choose the emphasis of the content or the brand depending on what (screen or print size) the design will be applied to. This played a positive role in facilitating the global rollout of the rebrand for Netflix’s Global Brand Team. They actually executed the design in different regions allowing it to be tested in real time.

We are just as excited as Netflix users and design enthusiasts to see elements of the Stack design adapted to a mobile ad, our TV screens, or even the side of a nearby building. Snap a picture and share your experience with your encounter of the rebrand in the comments below or on the WebDesignLedger.com Facebook or Twitter page.