Divi 2.4 – An Upgrade that Takes WordPress to the Next Level

The Divi 2.4 release represents the biggest update in Divi history.

This hugely popular responsive WordPress theme, Elegant Themes’ flagship theme, is destined to become more popular than ever, thanks to a ton of new features and feature upgrades.

The highly regarded Divi Builder has been significantly improved, and the new Library, a much more versatile Modules Section, and the globalizing of elements along with other improvements, makes Divi smarter, easier to use, and more flexible than ever.

Look into the history of any WordPress theme, and you will be hard-pressed to find a version upgrade with as many valuable new features, and as many improved features as you will find here. What makes it even more impressive is that the Divi theme has been a very high-quality, versatile, and user-friendly theme, from the very beginning.

A More Detailed Look at 2.4

A number of “sneak peeks” recently provided by Elegant Themes gave us a fair look at what was being planned, and what we could expect from this latest version. Now that 2.4 has arrived, it is possible to take a closer look at these upgrades in greater detail, although to get the total picture you will want to examine Divi for yourself and view the latest demos. 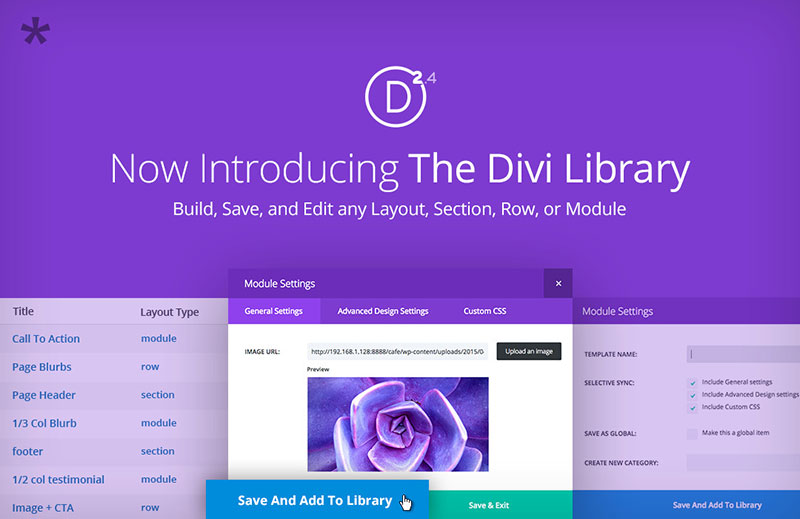 Layouts, and many more of them than were previously stored in what was called the Saved Layouts Function, are now located in the Divi Library. User-customer layouts can also be stored in the library, and even more importantly, sections, rows and separate modules can be imported, stored, exported, and even edited within the library, and elements can now be accessed from either the library or the page builder. The library has in fact been integrated into the page-building process.

The Divi Page Builder itself has always received good reviews, and it has undergone several improvements since its first release, but the user interface has, until now, remained basically the same. While it has served its purpose well, the page builder’s and other theme features’ upgrades have made it obsolescent and in need of change.

The user interface has not only been upgraded, it has essentially been reinvented. Several new display features have been incorporated, ease of navigation has been improved, and the interface has been also been modified to take advantage of the page builder’s enhanced integration with the new library and upgraded module settings, plus the addition of the post building capability.

A very useful new feature associated with page builder is it can now be used to create posts. A new post title module enables custom placement of page title, meta, and imaged blocks within a layout, and several sidebar layout options have also been introduced.

A Multitude of New Layout Possibilities

A number of enhancements have been made that vastly increase the number of layout possibilities. These include improvements in the way modules and elements can be easily customized, the fact that the layout elements, modules, and components that have been customized can be stored and retrieved in and from the library, and even edited within the library. Layouts can now be created that are more versatile and adaptable than ever.

If there was ever a time saving feature that was incorporated into 2.4, it may well be the ability to make any Divi Library element global, a feature that extends to page elements as well. When an element is updated, it will be updated everywhere, which at the very least eliminated the need for bookkeeping.

A host of new and improved features characterize 2.4’s Customizer. They are almost too numerous to mention here, but included are theme gutter, website content, sidebar width control, and body and header text settings enhancements. New footer text styles and phone and tablet styles have been added as well. Of particular note is the incorporation of over 100 new global module settings, a major step forward towards increased versatility.

The addition of advanced module settings was briefly noted in the revamped Customizer discussion, but this new Advanced Module Settings feature is one of the major enhancements 2.4 brings to the table. Advanced design settings have been added to each and every Divi module or building block. Users can now invoke a tremendous range of color, text, margin, padding, and button styling options. Custom CSS can also be entered directly within a module, giving Divi’s building blocks nearly unlimited flexibility.

The Pros Outweigh the Cons

There is a great deal to like about Divi 2.4. Promised enhancements, many of which have been eagerly awaited, are now a reality. This latest version features a significant increase in the number of page templates and layouts, and even more importantly, a tremendous improvement in the ability to customize designs down to the smallest detail, and with apparent ease. This theme’s ease of use has in fact been improved, although it has never been a source of problems in the past.

The documentation is good, especially the documentation for beginners, who might easily be overwhelmed by the wealth of features and capabilities that are being placed before them. The ease with which the page builder can be user however, goes a long way towards mitigating any information overload a novice might experience.

Should You Purchase Divi 2.4?

If you already have a Divi license, the question is moot, but it would still be worthwhile, and rewarding, to take a closer look to see what is in store for you. If you are not yet a current Divi user, this is your chance to own what is now becoming one of the fastest growing themes on the market in terms of popularity.

You will certainly be getting more than your money’s worth. Give some thought to purchasing the developer’s version, which only costs a few dollars more than the personal version. Both are subscription-based, and the license needs to be renewed annually if you wish to retain support, or you can opt for the lifetime version if you intend to be a heavy, long-term user.  Divi 2.4 is highly recommended.